(Scheduled post, 4 images) I arrived in New York City about 2:00pm on a Tuesday. By 5:45pm, I had taxied to my hotel near Central Park south, checked in, grabbed a bite to eat, walked to Times Square, and then decided to visit the Empire State Building (despite not having a pre-purchased ticket). Talk about right place/right time! I was amazed to find empty lines and empty elevators. By 6:10, I was standing on the 86th Floor Observation Deck with clear views of the cityscape below me.

6:23pm — Looking northeast toward midtown Manhattan, the East River, the Art Deco Chrysler Building with its terraced crown (at 2:00), and the Queensboro Bridge behind it. 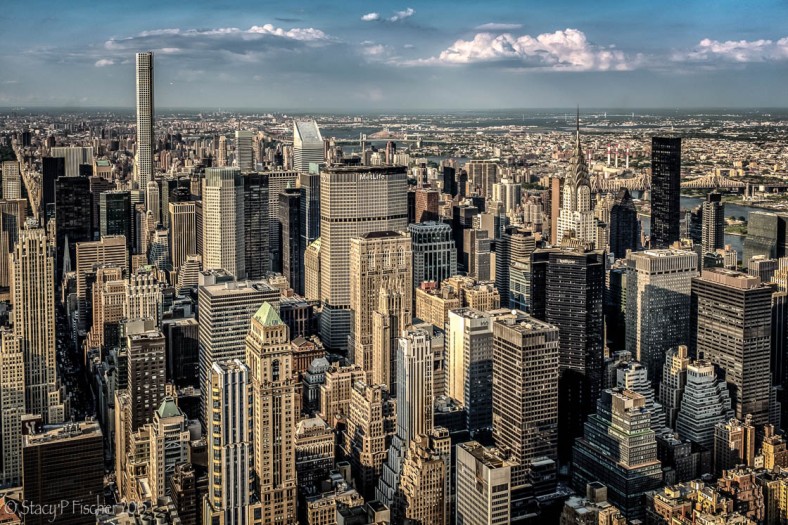 6:57pm — Looking south toward Lower Manhattan. In the distance is One World Trade Center (Freedom Tower); at 6:00 is the triangular Flatiron Building, bordered by Broadway on the left and 5th Avenue on the right, with Madison Square Park (at the bottom of the frame) just a block away.

As time marched on, more people began to show up and I realized it would be foolish not only to leave my prime spot, but to leave before the sun set and the city lights came on. And so I waited. And whiled away the time making friends with one of the ESB guards on duty. Two hours later, this was my view! 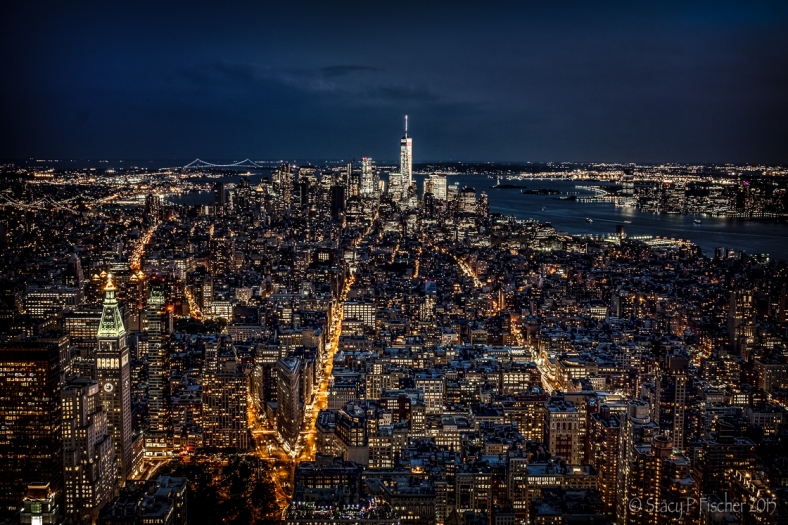 9:15pm — Looking north toward midtown Manhattan and Central Park. Fifth Avenue runs up the middle and the slender silhouette of 432 Park is to its right — the tallest residential tower in the Western Hemisphere, the third tallest building in the United States, and the second tallest building in New York City, behind One World Trade Center. 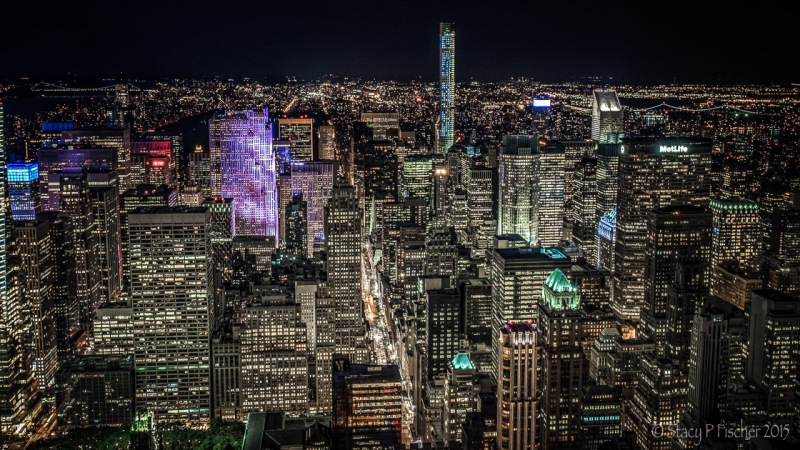 To those who may follow in my footsteps: (1) Tripods are not allowed on the deck. I was concerned that I would be turned away, but security put my tripod in a bin and gave me a claim tag. (2) The deck is open aired, but there is a wire security fence that encircles it. I jiggled my little Fuji X100T into position between the ledge and the diamond-shaped wire openings at the bottom and then used my remote release. It gave me enough stability to get these 4 second shots. For those with larger cameras and lenses, you may be able to use the fence to support your lens and achieve a good result. (3) Once the sun sets and people have gotten their night shots, the lines to the elevators to return to street level become very long, so be prepared to wait. As for me? Remember that guard who I made friends with while I waited? I tapped him on the shoulder to say good night as I was making my way to the end of the line; he smiled, beckoned me with his hand, and the next thing I knew, I was being ushered straight into the next elevator. Kindness always pays!

You’d think by this time, my adventures for the day were over. Nope. Once down on the street, I spent the next 2-1/2 hours roaming the city from ESB to Herald Square and Macy’s (see photo), and back to Times Square (see photo), tripod slung over my shoulder with my little Fuji attached. I had a ball! And never once did I feel unsafe, surrounded by people even as midnight came ’round. And when I finally made it back to my hotel, I was exhausted but exhilarated, knowing that within just a few short hours I would be meeting and spending the day with fellow Monochromia photographers (and New Yorkers), Joe Giordano and Patti Fogarty!

51 thoughts on “Manhattan from Above: The Empire State Building”