(17 photos) Last October, I travelled to San Francisco, my new Nikon D7100 in hand and two photography tours booked – one morning, one evening. I had a blast photographing the major tourist attractions, Golden Gate, Oakland-Bay Bridge, the Painted Ladies, to name a few. This October, I went back, but carried my Fuji X100T. I was excited to see the city through the Fuji lens!

So no sooner had we landed and checked into the hotel then I was off and walking, ever so confident in my ability to tackle the miles I would cover. I mean, I walked 33 miles in 3 days in New York City, so no problem. Or so I thought…

My first stop, Chinatown, was about a mile from the hotel. As I got to Grant Street, the main drag, I saw to my dismay that the street was pretty much covered in shadows. I hadn’t checked my sun app before setting out, but truth be told, it wouldn’t have made a difference in my plan. I had a limited amount of time and this was the only time I could get there. So I made the best of it and looked for whatever light there was.

My first shot, for obvious reasons! 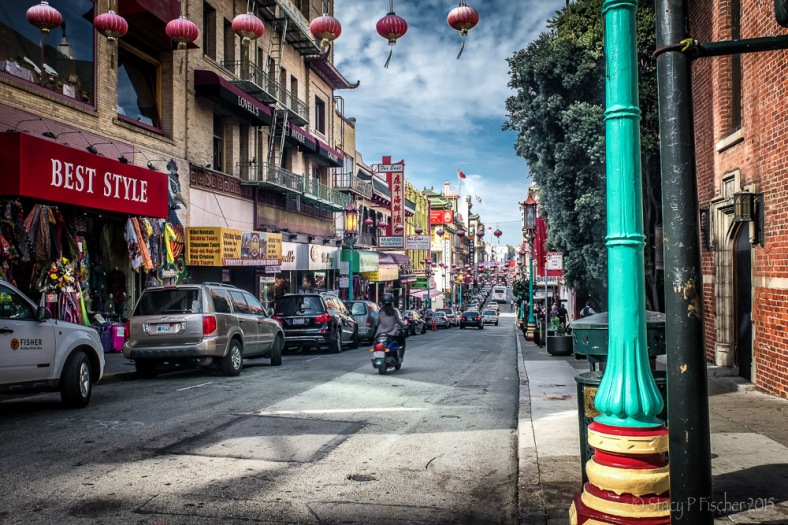 Loved the backdrop of the Financial District’s Transamerica Pyramid. 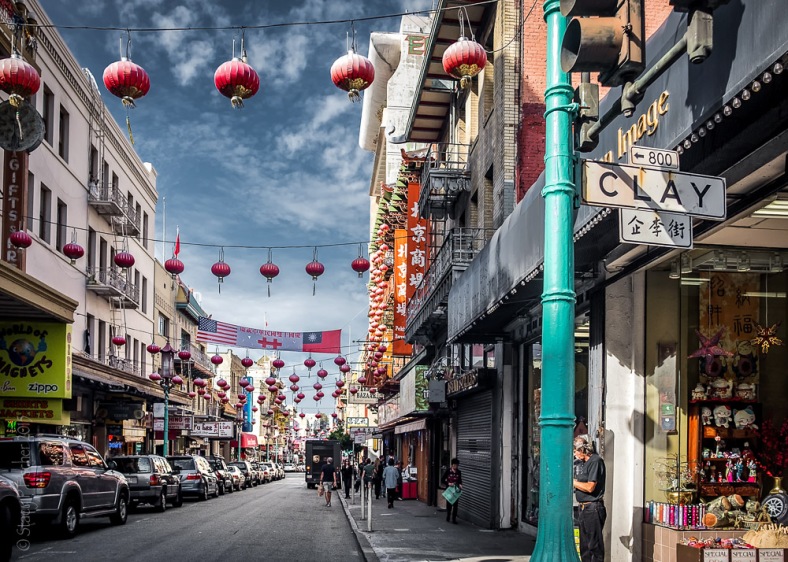 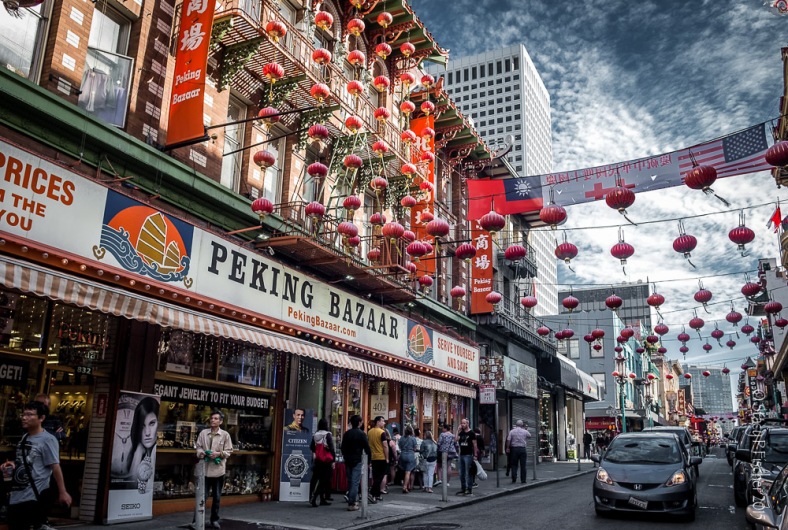 Having made my way down Grant Street and up a few others, I turned my attention to finding the Chinatown “gate,” finally asking a local shopkeeper where it was. She pointed back to where I had originally started, saying simply “down that way.” And, so, off I went. “Down that way” turned out to be 6 fairly long blocks, but I shot this picture when I once again crossed California Street. Note the sailors on the corner. It was Fleet Week in the city!

A few more blocks south, and there it was: Dragon’s Gate. This, along with the photo above, are my two favorites from Chinatown.

It was time to move on. My plan was to photograph a cable car with a view of Alcatraz in the background. Little did I know this journey would take me in circles and work my heart up to a beat it hasn’t pumped at in quite a few years. Partway through this unbelievable aerobic workout, I Facebooked my blogging buddy, Emilio Pasquale, and told him he was, oh, so right about about how tough the hills are in SF. I think I actually may have said something to the effect that I couldn’t breathe and was sweating bullets! On top of that, my left knee was beginning to act up. Yikes, what was up with that??

Sure wish I had hopped on this cable car at the beginning. On the other hand, then I wouldn’t have gotten this shot. See the span of the Oakland Bay Bridge in the distance? Pretty cool. 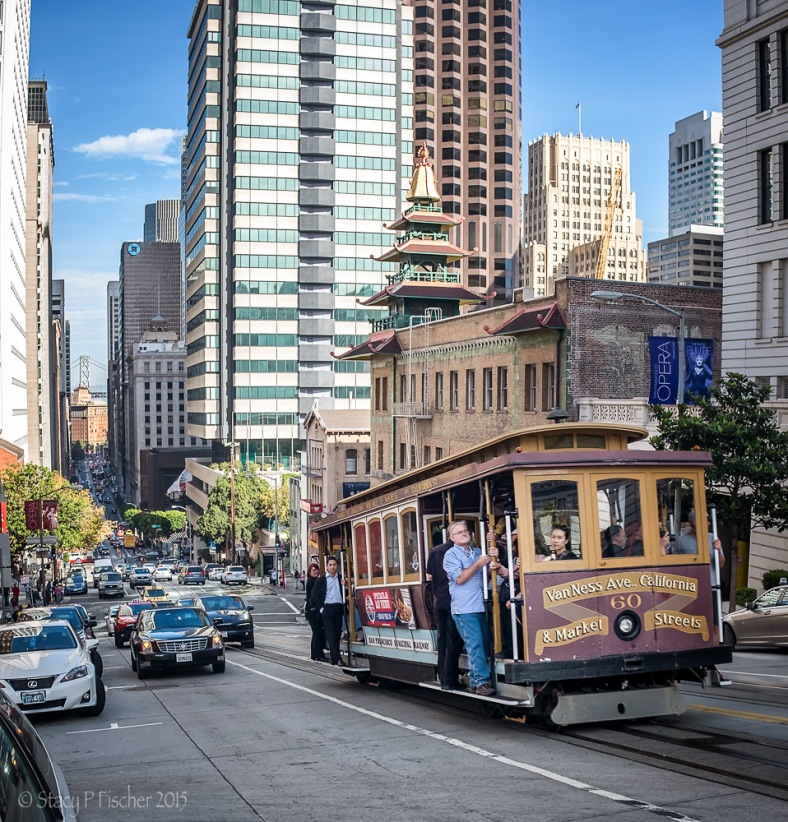 A common site in San Francisco – electric lines for the trolley cars.

20-plus blocks later, I finally reached my next photographic destination. Sadly, none of the photos I took trying to get a combination of Alcatraz and a cable car were worth posting. I did manage to pan these two shots though: 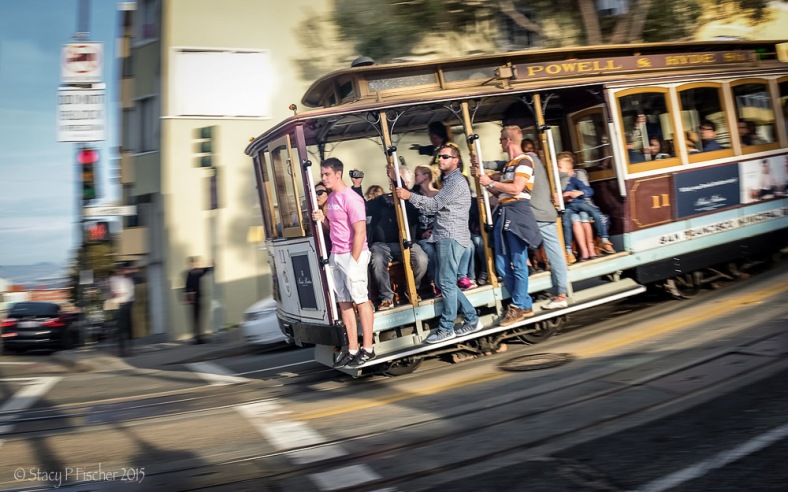 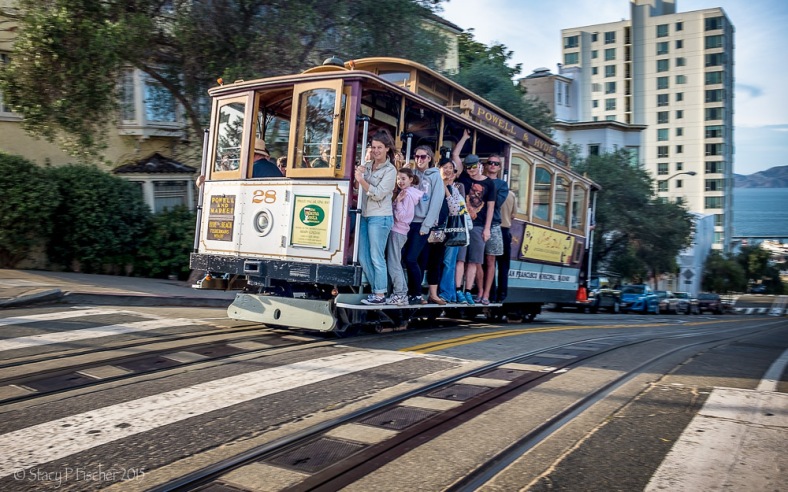 From here, I decided to head 6 blocks over to Ghirardelli Square (home of the famous San Francisco chocolate) and perhaps, finally, catch a cable car and get a shot from inside. (I “cheated” with this next shot – it’s actually one I took with my D7100 last year that I never posted. Boy, was I glad I wasn’t carrying that kit!)

I decided to forego a Ghirardelli hot fudge sundae in favor of lining up at the queue at the cable car turnaround to catch a ride back to California Street. I waited for 40 minutes and gave up, thinking I should have opted for the sundae instead. Thank goodness for Uber. 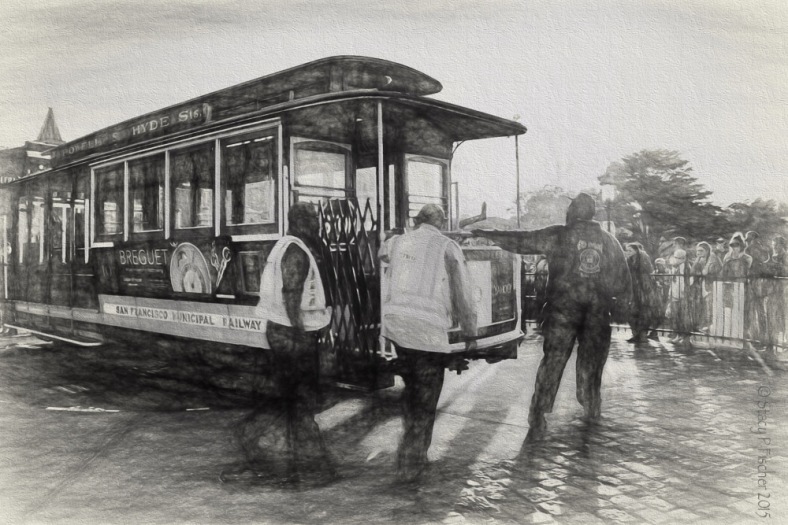 If you think my day’s adventures were over, think again. Come back in a few hours and see this afternoon’s post, San Francisco’s Ferry Building.

48 thoughts on “Chinatown and Cable Cars: San Francisco, Day One”