The first hurdle is choosing a color photograph that will work well in black and white. I’m learning that the conversion works best with a photograph where form and light are the dominant elements.

Form, as opposed to shape, is what gives an image a three-dimensional quality. Think of shape as focusing on the outline of an object and form as focusing on the subtleties of light and shadow that make the object stand out from its environment. Light helps to define form: one needs to find an angle where light creates the shadows that define the contours of the object.

The photo of the Martin Luther King, Jr. Memorial was one where I purposely took into account form and light when shooting the image. By crouching down slightly to the right of the statue and shooting upwards, I was able to capture the shadows cast on the right side of the statue, as well as those underneath the crossed arms and the hemline of the suit jacket. This all worked to give the photo the three-dimensional feel I was going for. (I also love to shoot statues from below to give them a “towering” feel.)

Once in Lightroom, however, I faced a multitude of hurdles, as the choices of how to convert and best post-process this photo were endless. I’m typically pretty decisive about what looks good to me in a color photo, but not so with black and white. I had many virtual copies in my filmstrip, going back and forth between them all, until I finally settled on the one I’ve posted here. Once again, for those interested, a brief description of my choices:

And so my learning curve continues…

Many thanks to Leanne Cole and Laura Macky for sponsoring Monochrome Madness
and contributing to my education as a photographer. You can view all the submissions for Week 9 later today on Leanne’s blog. 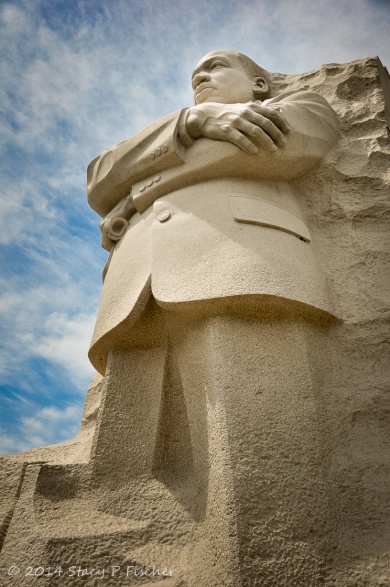 12 thoughts on “Lightroom Before and After: Monochrome Madness Challenge”