Welcome to ABFriday’s monthly One Photo Focus! This month, 18 photographers are sharing their post-processing interpretations of one “before” image taken with a cell phone by Y Prior of Priorhouse.

We begin with Y’s “before” image, followed by the “afters,” and at the end, a gallery of all so you can watch the changes as you scroll through. Be sure to click the links to each participant’s blog as many have written posts “uncovering the magic” behind their “after” images. And if you would like to participate in November’s One Photo Focus, you’ll find all the details on the After-Before Friday Forum page.

Submitted by Y. Prior — Priorhouse 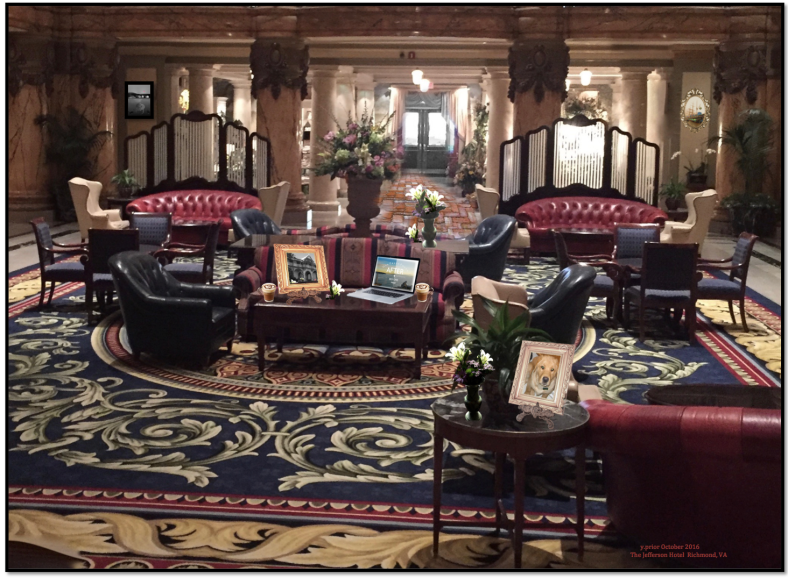 Y says: I was so excited when Stacy chose this photo for the October OPF. This photo was taken at The Jefferson Hotel in Richmond last March – late at night, which is why there are no folks. Thanks again to Stacy.

For my edit, I cropped, straightened, and then lightened a few sections (back door) and removed the exit sign. I added some bricks to the floor – and then a few photos with past OPF – and some coffee.  I guess I was turning this into my living room- laptop open – ready to check the ABF post.

I have to admit, Y’s image had me perplexed for the first few days. I did know I wanted to try to edit it entirely on my iPad, and perhaps that was the immediate stumbling block, as I had never done that before in any meaningful way. Without real knowledge of the programs available, and thus without any workflow, I had quite a few false starts. And in fact, I finally enlisted my daughter’s aid and asked her to have a “go” at it. And she did. It is from the base she established for me that I moved ahead, removing the railing, and using Pixlr to finally find my way to an image that I liked. I wish I could tell you what effects and textures I used, but once I got started, I just kept moving through until I was finished. The light rays were the final touch on my iPad that sealed the photo for me. (I have to confess that I did then take the photo into Photoshop to better clean-up the navy blue border of the rug in the front left corner, which was left a big ragged after removing the railing and something that I couldn’t quite get right in Pixlr.)

So many thanks to my daughter, Cate, for her input and to Y for presenting us with a fun challenge!

Joanne says: When looking at this photo for me it felt very surreal. The building was so grand, dwarfing the furniture within. It made me feel as if I was looking into an antique doll’s house. Hence I decided to create a miniature effect to match this emotion. 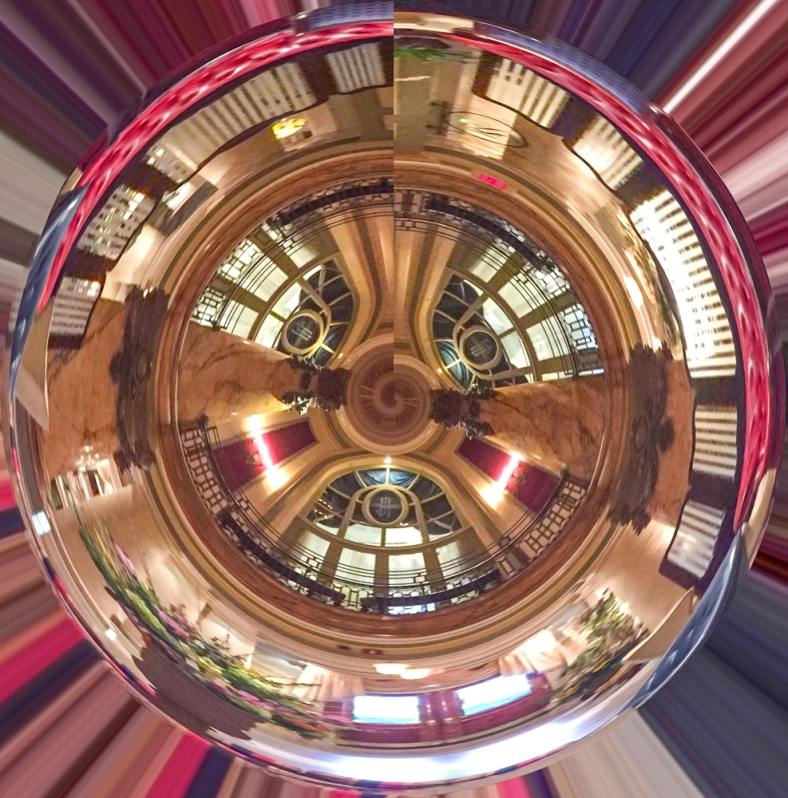 Laura says: A great twist on this challenge!  I chose to edit the image on my iPhone in a few apps.  Check out my post to see how I did it!

Submitted by Khürt Williams — Island in the Net

Original photograph by Y. Prior; Edited by Khürt Williams

How I did it:
1. Downloaded the file into my IPad Pro
2. Opened up Snapseed and did all adjustments there. I added the tilt shift plus added contrast.
3. Opened Photoshop Touch to resize
I wanted to make it look like a play house. Everything was completed in about 5 minutes.

Linda says: I loved this month’s challenge.  I decided to try for a haunted house vibe since it’s October. 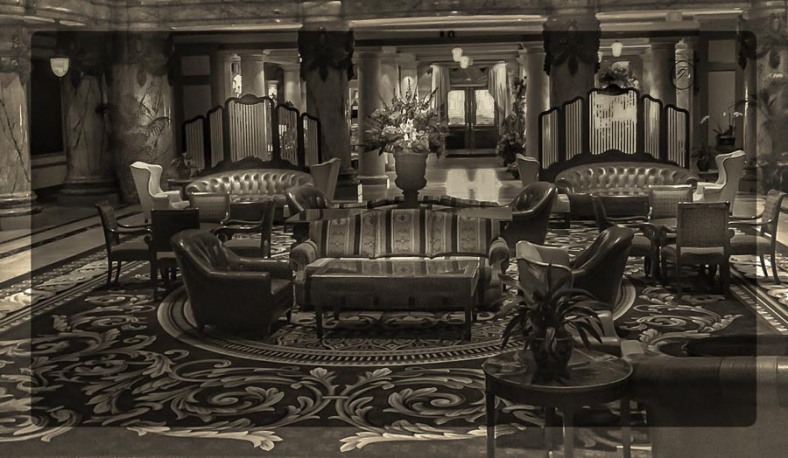 Robin says: I really liked the image from Y. Prior this month and the fact that it came from a cell phone was impressive.  I thought it would be interesting to run it through a gauntlet of  Photoshop tools and see what emerged.  My first step was to do a little straightening and then remove the chair in the foreground.  Then I converted it to TIFF file, opened it in RAW, then created 5 copies exposed in increments of one f/stop (minus 2 to plus 2).  Next, I used the HDR merge tool to create a single HDR image.  It was then converted to a Smart Object and Photoshop’s “Glowing Edge filter” was applied.  It looked pretty surreal by this point but needed something extra.  So I “borrowed” a photographer from the Internet, scaled her down and placed her in the foreground.  Voila!   Took about 30 minutes.

Michelle says: I was trying to be creative, but nothing amazing was coming. So, I did this edit and then I did another one on a phone photo app. That extra edit will be on my blog. I guess I was trying to get creative points by doing two versions, lol. 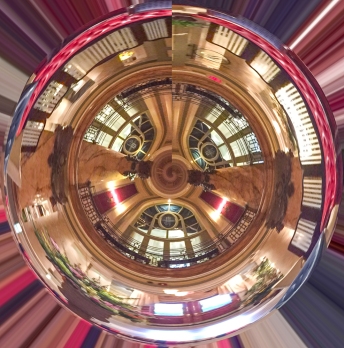 Original photograph by Y. Prior; Edited by Khürt Williams 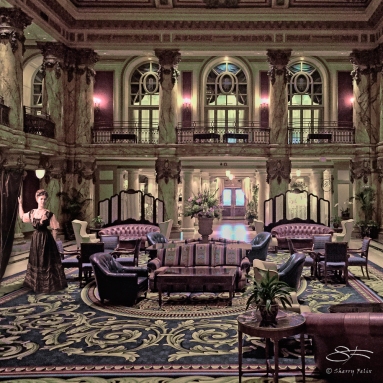 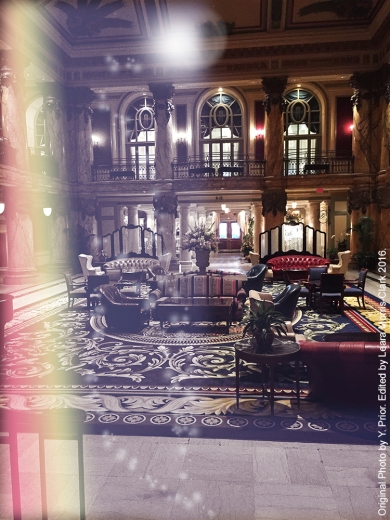 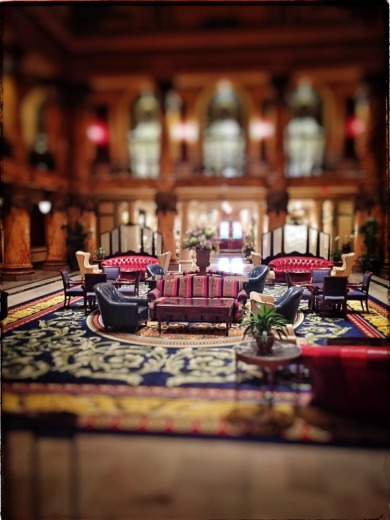 36 thoughts on “October One Photo Focus”