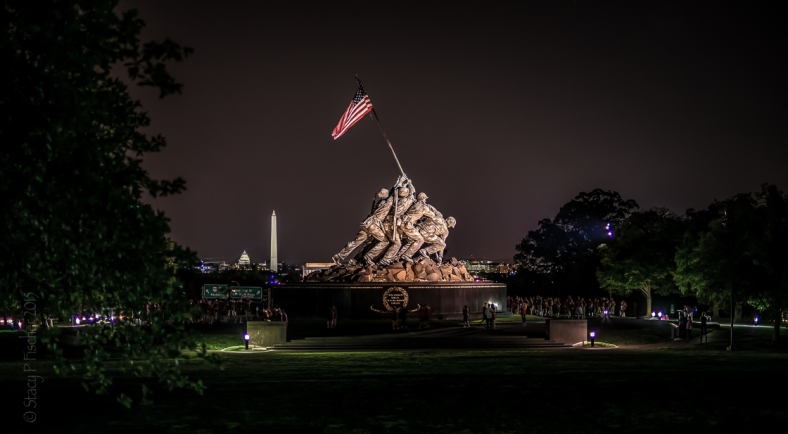 While I’ve lived in the Washington, DC area for 35 years, I had never visited this amazing memorial at night until a few months ago, lured by trying out a rented Fuji XT1. Scores of tourist buses lined the parking lot, and visitors happily snapped photos of this iconic site. While I photographed the statue from up close, I was having a difficult time getting the wider angle shot I so badly wanted – that is until my husband suggested climbing on top of a stone pillar a distance from the memorial. Large enough for me and my tripod, it was the perfect vantage point to capture it along with the Washington Monument and the Capitol and the group of tourists on the right, barely visible, staring up at the memorial.

Thanks to my husband for the suggestion (and for helping me get up and down from a very high pillar!).

The design of the memorial by Horace W. Peaslee and massive sculpture by sculptor Felix de Weldon was based on the iconic photograph of the raising of the second flag (replaced smaller flag) on Mount Suribachi by Associated Press photographer Joe Rosenthal.)