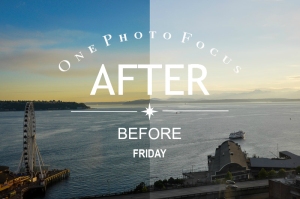 Welcome to ABFriday’s monthly One Photo Focus! This month, 27 photographers are sharing their post-processing interpretations of one “before” image submitted by Robin Kent of PhotographybyKent. From patriotic to apocalyptic (and everything in between), this month’s group certainly had a lot of fun with Robin’s image of the United States Capitol in Washington, D.C.!

We begin with Robin’s “before” image, followed by the “afters,” and at the end, a gallery of all so you can watch the changes as you scroll through. Be sure to click the links to each participant’s blog as many have written posts “uncovering the magic” behind their “after” images. And if you would like to participate in August’s One Photo Focus and/or ABFriday in general, you’ll find all the details on the After-Before Friday Forum page. We’d love to have you join the party!

Robin says: I dipped into the filter options available in Photoshop and found some interesting new ways to distort reality. 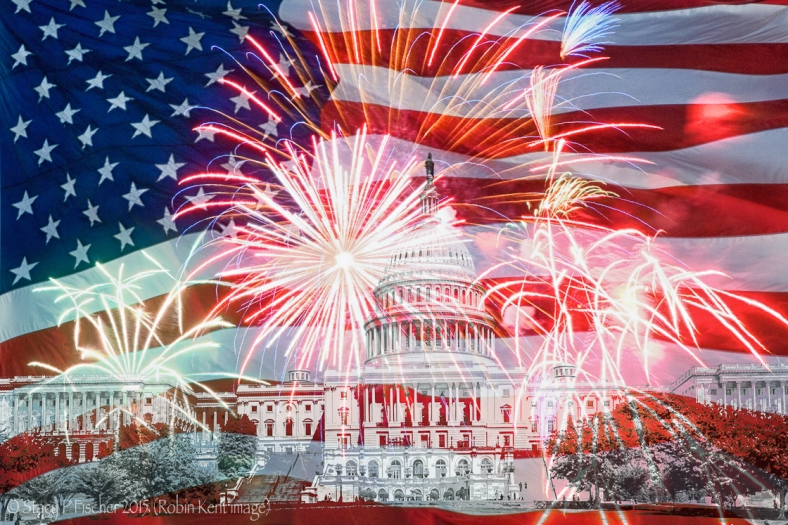 Admission: There is only a partial video for my image. Why? Because I tried out new techniques in Photoshop and went back and forth and up and down, with frequent trips sideways, to get to my final result … and I didn’t write anything down. When I went back into Photoshop to try and recreate what I had done in preparation for making the video, I couldn’t do it. So much for learning something new.

What I can tell you is that I imported into Photoshop Robin’s image and the flag and firework background. I used the quick selection tool to select the Capitol in Robin’s image. When I was happy with my selection, I hit copy, switched to the flag picture, and hit paste, creating a second layer. From there, I increased the size of the Capitol until I was happy with how it looked on the background. But for the life of me, I can’t remember how I made the Capitol black and white. I do remember adjusting color sliders though, so maybe it was through a hue/saturation layer. For all you Photoshop gurus out there, please tell me how I can add an adjustment layer to a selection. I’m driving myself crazy. But herein lies the beauty of this forum. Help is always given and learning progresses.

I actually was going to skip the video this time around, but then I figured I could at least show you how I accomplished the compositing of the two images (after I made the video, I double-checked to make sure that’s what this technique is called). How I did it is at a very basic level, but, hey, we all start somewhere 🙂 I also decided to try out WordPress’s VideoPress function, which they have just upgraded. So for those of you who watch, let me know if you have any issues.

In the end, I do hope you enjoy my 4th of July interpretation of Robin’s image. Given that the West lawn of the White House (depicted here) is the site of the annual D.C. 4th of July concert that ends with a huge fireworks display, this seemed like a fitting treatment! Thanks, Robin, for such a great and timely image!

Karen says: Thanks, Robin for another challenging shot.  I enjoyed taking my twist at it but did stick with traditional editing.  You can read about my editing at http://wp.me/p2pU8K-Ra. 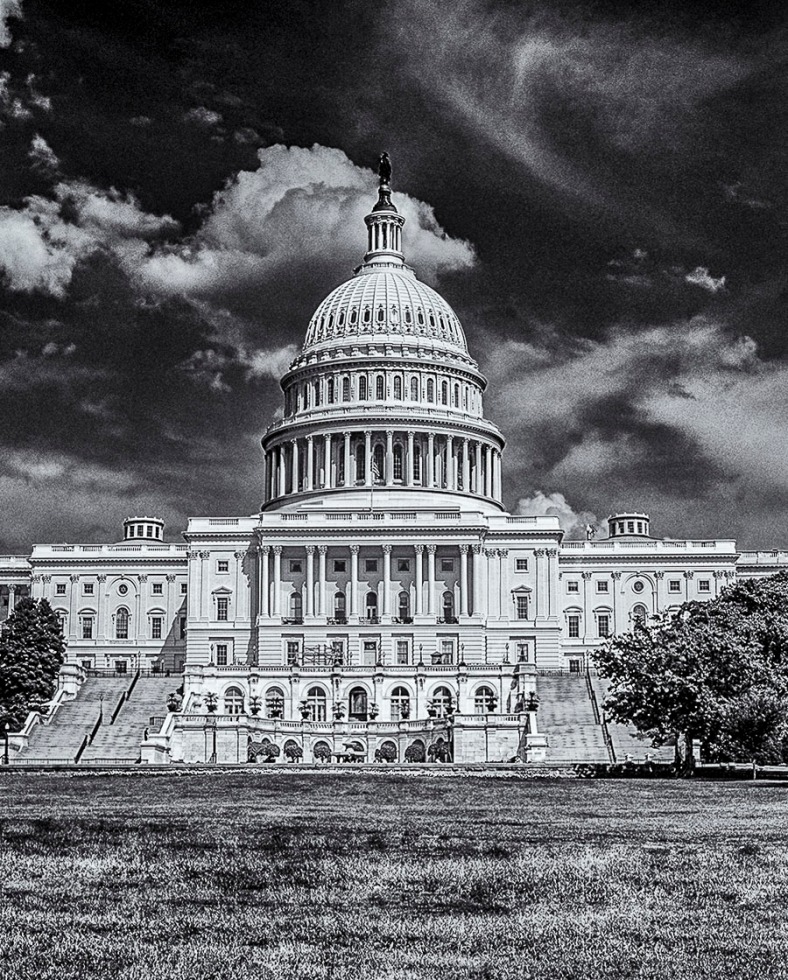 Cee says: I really like the wide scope to the Capitol Building because it stands so grand in all its glory and the photo is extremely well balanced.  However, since I like much closer up photos, I decided to do a major crop on the capitol building and then decided to turn it into a dramatic black and white photo.

Kirsten says: Since, it is July 4th weekend I decided to edit Robin Kent’s wonderful photo with a patriotic theme in mind. I wanted to try something outside of my comfort zone, so I went with a watercolor painting technique I learned in my Photoshop Artistry Class. 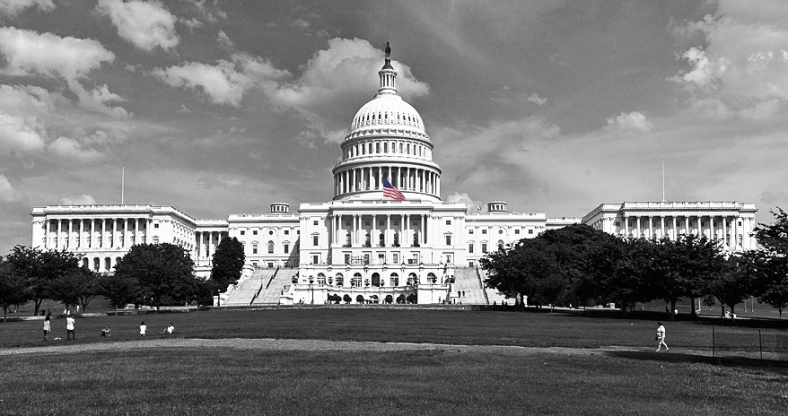 Helen says: I did the normal thing like cropping, sharpening… etc. I then converted it to black and white, and since I didn’t miss the color, I decided to keep it as black and white. Later, feeling like to celebrate 4th of July, I found a bigger flag to add it into the photo.

Stacey says: Lensaddiction (the Other Stacey) had fun adding in iconic American images to Robin’s fabulous photo of the White House, to create a quintessential snapshot of the US from an outsiders POV.

Submitted by desleyjane — Musings of a Frequent Flying Scientist 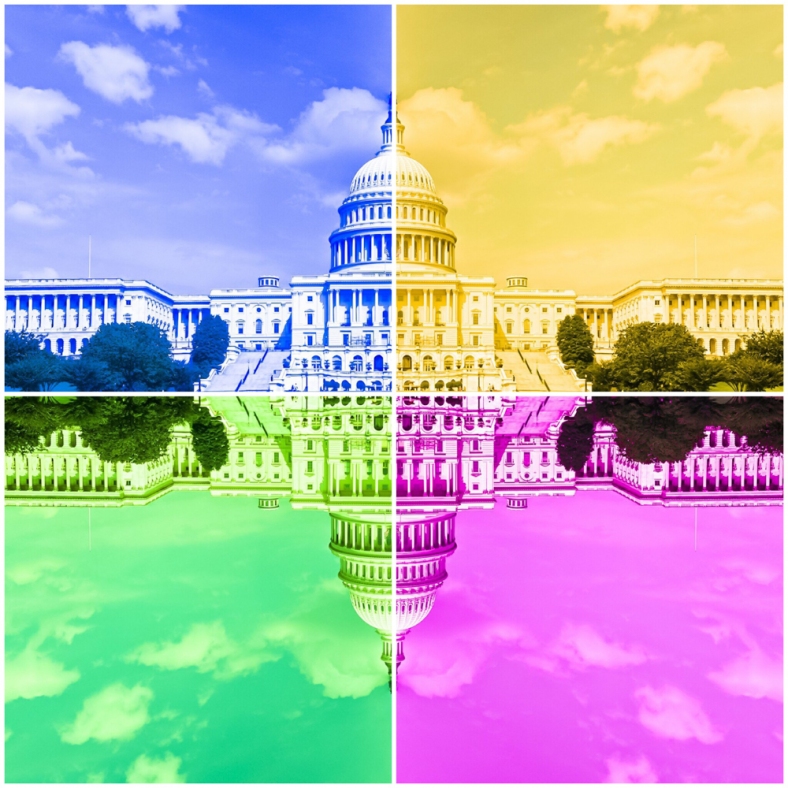 Desley says: This month, I’ve gone with three editing variations: natural, atmospheric monochrome and a fun&funky one. Thanks to Robin and Stacy, this was good fun! 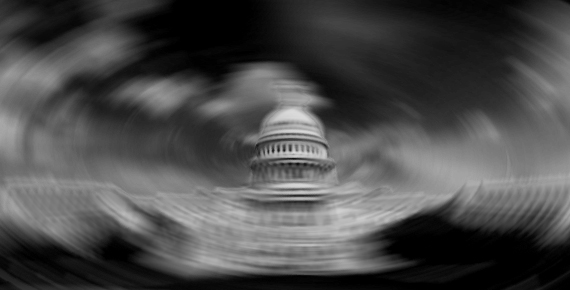 Raewyn says: I just played around with Camera Raw and some of the filters in Photoshop.

Chris says: Reading about the US Capitol, the age of this imposing building and the passage of time were the aspects I wanted to emphasise in my edit.

Katie says: I knew when I saw Robin’s wonderful image of the US Capitol that I wanted to turn it black and white, click here to see how I did it! 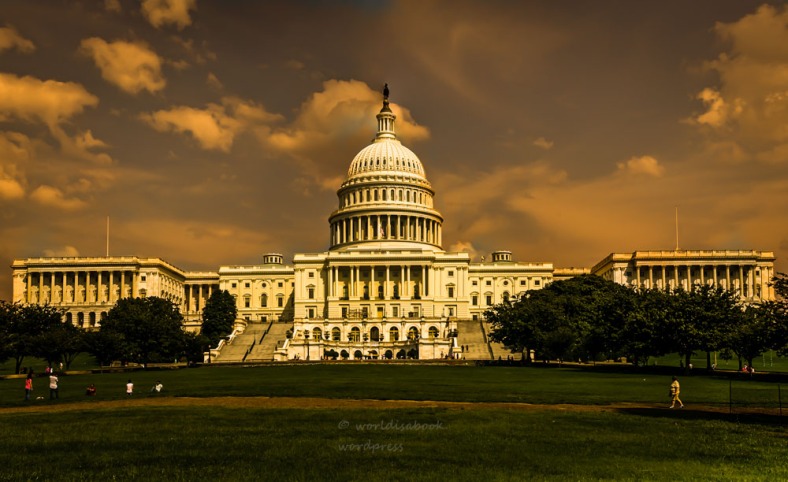 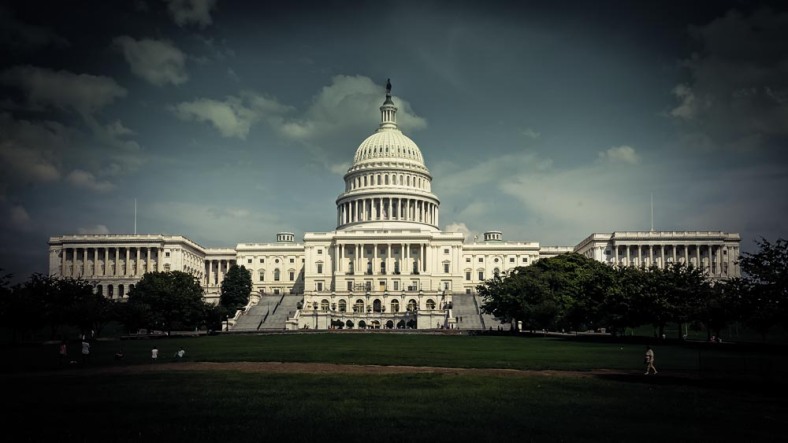 Joanne says: On seeing this iconic image I was reminded what this represented to so many and for how long it has been a part of history books, something I wanted to highlight with my editing.

Nic says: I didn’t really have a specific goal in mind but I knew when I wasn’t getting it *right*.  I tried so many variations on this that I started to get confused as to what I had done and where I wanted to go.  My husband suggested I make the flag visible thru the fireworks rather than across the building and it looked pretty cool.  Now I had to decide if I wanted the building to look more nighttime-blue or leave it more the color it was only darker… ugh.  I still don’t know, but I think this image is more striking.  Even if it doesn’t look anywhere near realistic.

Nancy says: This month, I wanted to try out some of the fun bells and whistles that come with Photoshop. For this image, I used a Fine Are Gallery setting, preset sepia toning, and an interesting brush to clear away the center of the gradient mask. Thanks, Robin, for a fun image to play with! 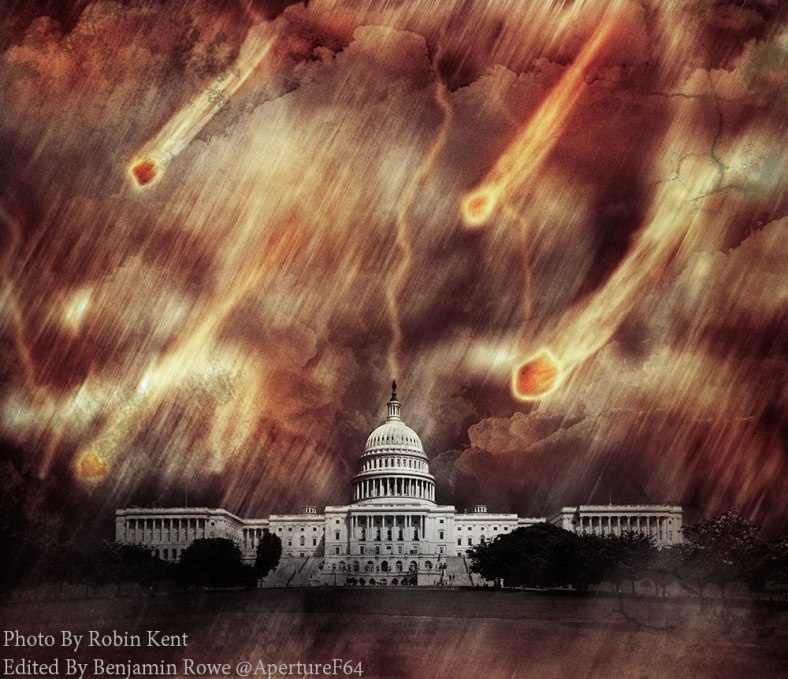 Michelle says: Since my schedule seems to never at a point of calming down, I decided to go with whatever edits I could come up with in my 15 minutes before leaving for work. Here is what I got from my no-time-to-second-guess moments…

Jaime says: This time, we have a splendorous panoramic shot from Robin, as he use to (congrats Robin, I really like it!). I hope he (and all of you) have no problem with the alteration I tried, but if I would have been in Robin’s shoes, this is the image I would have liked to get.  I’m looking forward to seeing other’s versions!

Nancy says: Thanks to Stacy and Robin for another month of ABFriday! While other months had tough technical challenges to the photos, this month was hard because the photo was so nearly perfect already. What do you do with that?

I started with some minor adjustments in Lightroom, mostly to improve the white balance and take the yellow cast off the building. Since I don’t know this scene, I assumed the building was mostly white but it could be yellowish! I cloned out some of the foreground people so that when I started playing with the picture, they didn’t interfere with the appearance. That one is always a tough call; sometimes I think pictures look nicer without people and other times a scene looks too sterile. I also moved the bottom up slightly to hide the fence at the right.

I improved the picture some more with Topaz Adjust HDR Dynamic Pop, at which point I realized the sky had a fair amount of noise. I used Topaz DeNoise Raw Strong to remove that. At this point, I put a border around it to finalize it.

However – and there’s always a however for me – what I wanted was to convert it to a pen and ink drawing. That so did not work, mostly because of the sky. I’m not sure if using DeNoise was the reason, but while the buildings looked great, the sky looked weird.

In the course of playing with it though, I liked the looks of Topaz Impressions Watercolor 4. It removed detail from the building, but I liked the ethereal effect it gave. I used onOne for a torn paper border and that turned out to be my favorite.

For more information and to see what didn’t work, visit my blog at http://wp.me/pow9k-2rt.

Submitted by Lynne Ayers — Beyond the Brush Photography 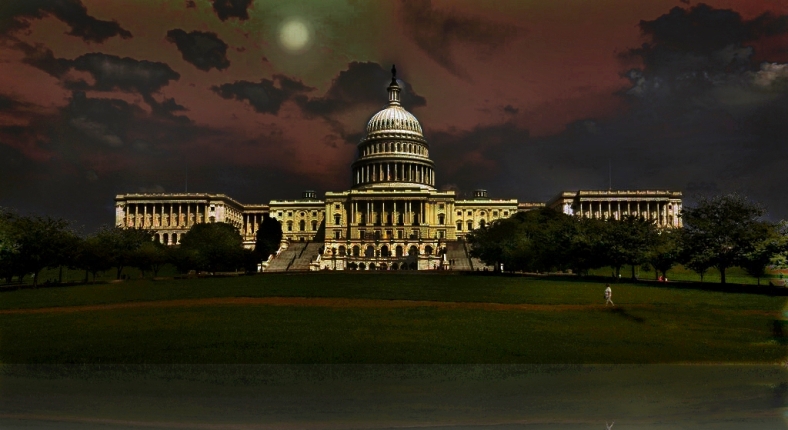 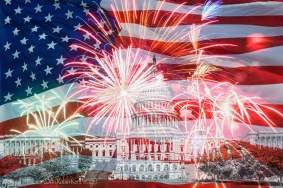 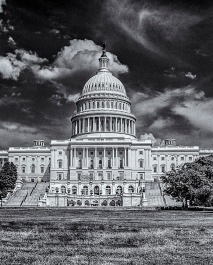 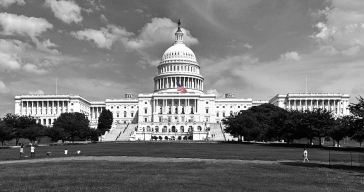 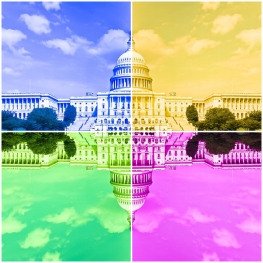 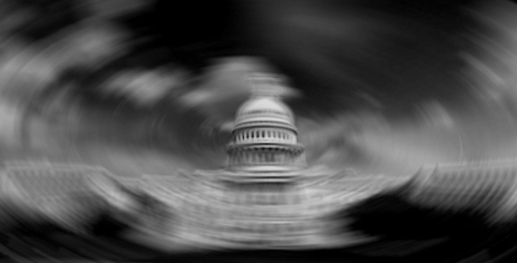 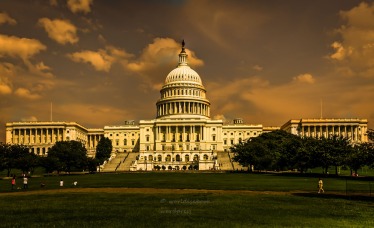 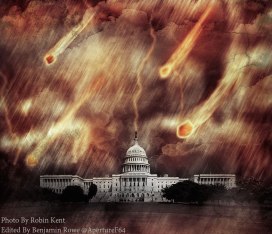 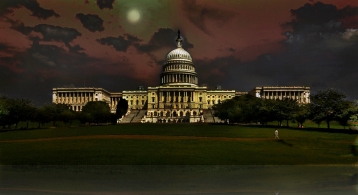