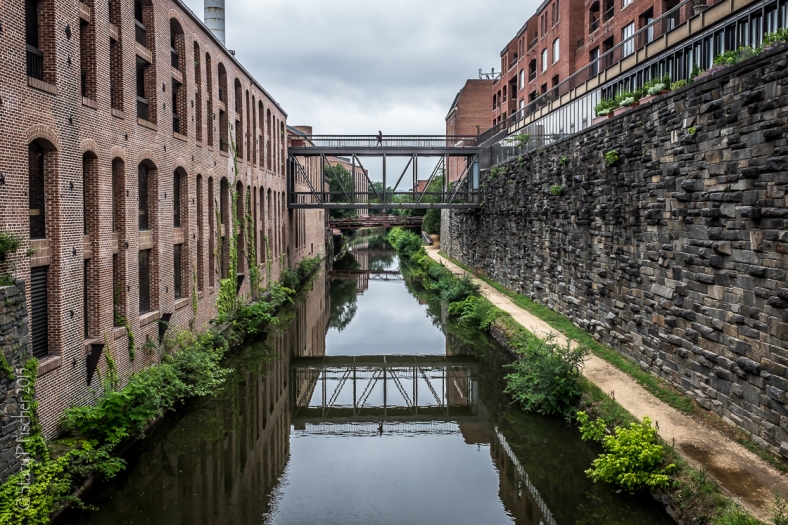 Georgetown is filled with wonderful photographic spots, and on this day, I set my sights on the peaceful C&O Canal. An occasional jogger ran down the path, a few pedestrians meandered on a lunch-time walk, while others crossed the bridges over the canals, many with bicycles. But the shot I wanted — someone crossing the foreground bridge — took some patience.

If anyone was to cross, I was expecting it to be on the lower level of the bridge. I was so surprised to see this woman crossing on the upper level that I missed the shot entirely. From then on, I had my camera focused and my shutter finger ready for what I hoped would be her return crossing. She did not disappoint!

The black and white version is posted on Monochromia. Which do you prefer?

(The184.5-mile Chesapeake and Ohio Canal operated from 1831 until 1924 along the Potomac River from Washington, D.C., to Cumberland, Maryland. The canal’s principal cargo was coal from the Allegheny Mountains. Rising and falling over an elevation change of 605 feet, it required the construction of 74 canal locks, 11 aqueducts to cross major streams, more than 240 culverts to cross smaller streams, and a 3,118-foot tunnel. The canal is now maintained as the Chesapeake and Ohio Canal National Historical Park, with a trail that follows the old towpath. Credit: Wikipedia.)